Has The Flash just jumped the shark?! Hell no !!! This week’s adventure starts two years ago – a promising young sports star has just won a big football game and is getting praise all around when suddenly the STAR labs explosion sends that fateful particle wave his way. Heroically he herds everyone inside to safety but gets struck by the blast himself. Present day Dr Stien’s health is rapidly decreasing – without Robbie Raymond around to stabilise the symbiotic relationship his Firestorm form demands he is fluctuating between hold and cold flame and will soon completely burn out.

It’s up to the team to find him a suitable match to rekindle the bond and there are only two suitable matches. A fellow scientist Henry Hewitt who craves the idea of new found power and our reluctant football hero Jax Jefferson, but the right choice is not always the most obvious. Meanwhile Iris is ready to confront the past and accepts an offer to meet the Mother that abandoned her twenty years ago. At first she shits her down completely much to everyone’s surprise, it’s only when she finds out that she’s dying does she waive, but that’s not the only secret Mama West is hiding. Iris is an investigative reporter god dammit and she’s uncovered there’s another Skywal… I mean west. A secret brother that Francine has kept from Joe all these years, uh oh, the plot thickens. Who could this lost lost brother turn out to be? Hmmm, I wonder.

After testing out the potential candidates, eager Henry Hewitt is devastated to find that he’s not compatible. Becoming enraged and furious at the tease of power offered by the STAR labs team only to be harshly denied he goes on a rampage unleashing waves of energy and destroying everything in his path. The reluctant Jax must step up to take him down and once successfully combining with Stien, saves the day as the new Firestorm. I’ve gotta say, even though the team were on a deadline they’re getting pretty casual about who they let in to their lab and who Barry reveals his secret identity to.

Just as the episode is winding down, Barry is ready to take a shot and confess his feelings for Paddy when all of a sudden a giant scaly hand clutches around his entire body swooping him high up before we see what the hand belongs to. A giant fully rendered Street Shark ! what? it’s not? who? … it’s King Shark? Well it doesn’t matter either way, The Flash is choked out by a giant half-man, half-shark! Paddy steps out the cafe and draws her fire arm, King Shark storms toward her snarling as she empties her entire clip in to the creature but it’s no use the bullets simply bounce off. All hope is lost just as his massive jaws are about to descend upon her a blast of blue energy renders the beast unconscious. A lone figure stands holding a giant plasma rifle, shrouded in a hood he casually walks away, a recovered Barry speed chases him down. “Who are you?” He demands as Harrsion Wells  slowly turns around and then …. BOOM end titles.

AHHHHHH !!!!! So much awesome! Without any explanation the show has introduced the most awesome villain this side of Gorilla Grodd. I sense an ape versus shark showdown! Overall this episode was a nice change, highlighting some of the secondary characters and setting up the pieces for things to come. Though with only a limited holding cell size it looks like the STAR labs team are gonna need a bigger boat.

SIDE NOTE: The title of the episode is a reference to the Firestorm character’s solo comic title “The Fury of Firestorm” running from June 1982 – August 1990 during also titled “Firestorm, the Nuclear Man” and King Shark was voiced by none other than Solid Snake himself Mr David Hayter. 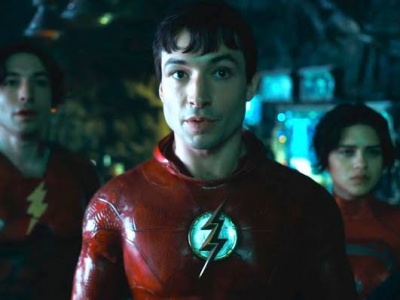